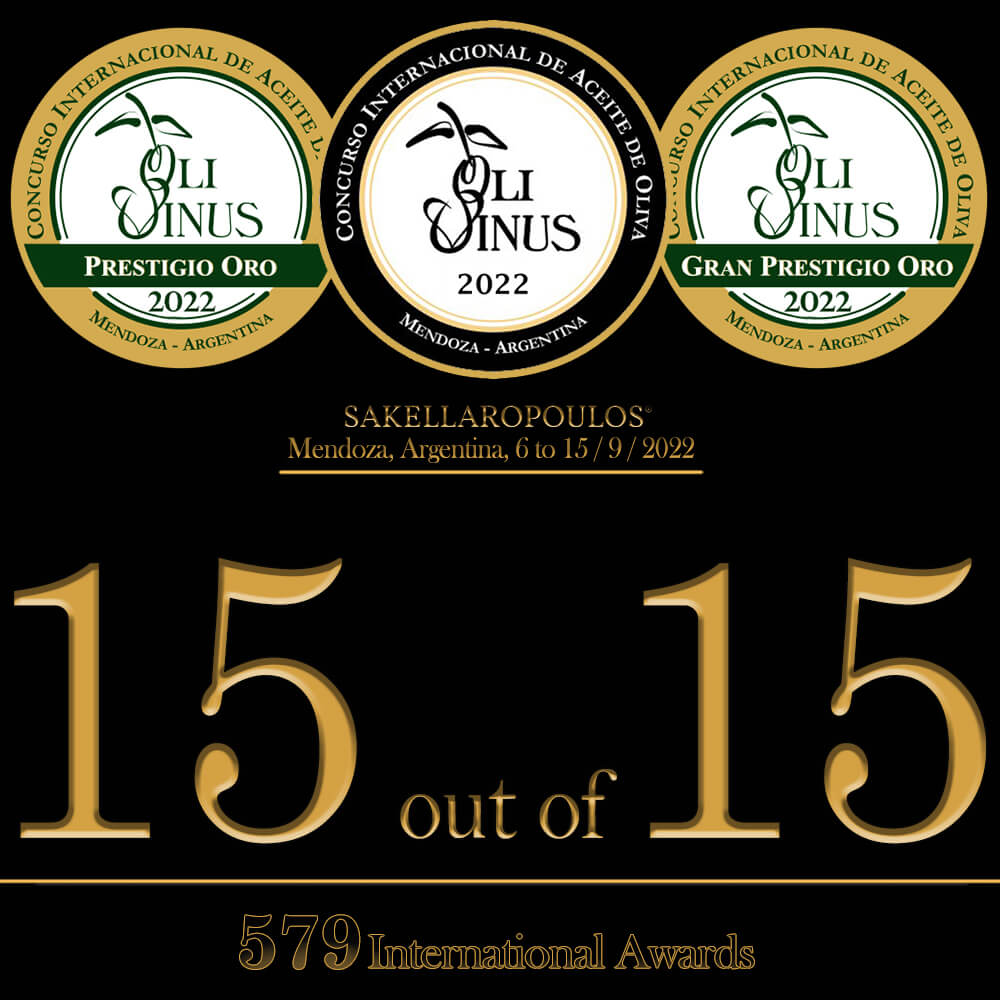 The OLIVINUS International Competition 2022 took place in Mendoza, Argentina, from 6 to 15 September 2022, with the participation of hundreds of olive oils from dozens of companies, from many countries around the world. It is one of the most recognized olive oil tasting competitions in the world, having a very high degree of difficulty, which is evidenced by the high score of 9/10 given by the international EVOO World Ranking.

The tasting of olive oils in OLIVINUS IOOC 2022 is carried out with the method of blind tasting by expert panel tasters of international prestige. It is the most important competition in Latin America and in the countries of the Southern Hemisphere in general.

Greater difficulty arises from the fact that the olive oils of the countries of the Southern Hemisphere are fresh, produced almost a few days ago, compared to the rest of the world where almost 1 (one) year has passed from their production.

• With 15 major gold awards
• 6 Grand Prestige Gold, 5 Prestige Gold and 5 Gold awards
• The olive oils were judged 1 year after their production
• In the Olivinus International Olive Oil Competition 2022
In detail, the 15 gold awards at the 16th OLIVINUS International Olive Oil Competition 2022, for Sakellaropoulos Organic Farms, from Sparta, Laconia and Greece, are:

It is the first time in the 16 years that the international OLIVINUS competition takes place that a Greek olive producer and Greek organic and culinary olive oils, exclusively self-produced, are distinguished with so many top awards.

This exceptional award of international prestige in Argentina marks a very high level of distinction in the field of olive growing for our country Greece, our land Sparta Laconia and for the course of Sakellaropoulos Organic Farms for the last 30 years.

It is also a special honor for the organic, Single Estate olive products of a Greek olive producer to be recognized in the most important international competitions for their high quality, for the innovation in their production, their unique taste and their wonderful combinations, while at the same time being considered among the top internationally.

These fifteen (15) major awards, at the OLIVINUS International Olive Oil Competition 2022, complete the unique number of 579 international awards for Sakellaropoulos Organic Farms worldwide, a record number for a Greek olive producer exclusively of their own olive products (Single Estate).