A great honorable distinction for Sakellaropoulos Organic Farming at ARISTOLEO AWARDS 2017, for the highest contents of health-protective properties, found in our table olives, worldwide.

ARISTOLEO AWARDS 2017 is a national competition that differs from others, because it doesn’t focus on the taste but mostly on the beneficial properties found in table olives and their impact on human health.

These health-protective properties are now measurable with the Nuclear Magnetic Resonance (NMR) method that has been developed by Greek scientists at the Faculty of Pharmacy of the National and Kapodistrian University of Athens, who collaborated with other university departments worldwide.

The NMR method has been developed by professor Magiatis Prokopios, professor Eleni Melliou as well as their research team at the National and Kapodistrian University of Athens
These health beneficial properties that are found in table olives are called phenols, with tyrosol and hydroxytyrosol being some of the most important.

The phenols are mighty microingredients that are basically natural antioxidants and have an important biological activity. They seem to have anti-inflammatory, antioxidant, heart protective and neuroprotective effects on humans.

Also, the European Regulation 432/2012, which is currently in effect, states that if a product has certain levels of these properties or higher, it is able to have a health claim. The limit of these properties, as stated in the regulation, is more than 5 mg of tyrosol and hydroxytyrosol combined per kilogram of a product.

The international ARISTOLEO AWARDS 2017 competition, awarded olive samples that have the highest concentration of combined tyrosol and hydroxytyrosol, as measured with the use of the NMR method.

It was concluded on March 17, 2017 and the results are fascinating for Sakellaropoulos Organic Farming, with a double award for our table olives LEMONENIES – Kalamata variety. 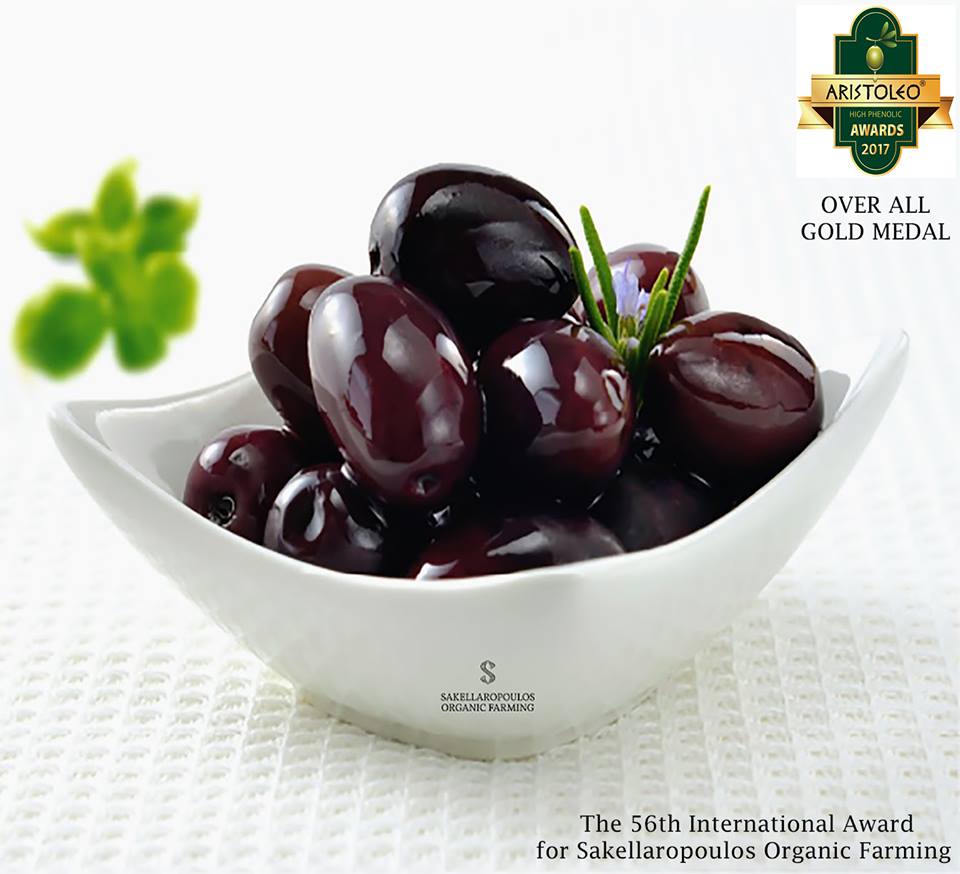 This award is a tremendous honor because it is a recognition of our efforts for 24 continuous years, to produce specialized organic products, that besides their many awards worldwide for their taste, they are now getting awarded for their health beneficial properties, with the highest concentration of all the table olives tested worldwide.

Based on the NMR analysis results,
the daily consumption of 5 of our table olives, exceeds the limit of the EU regulation, therefore improving human health.