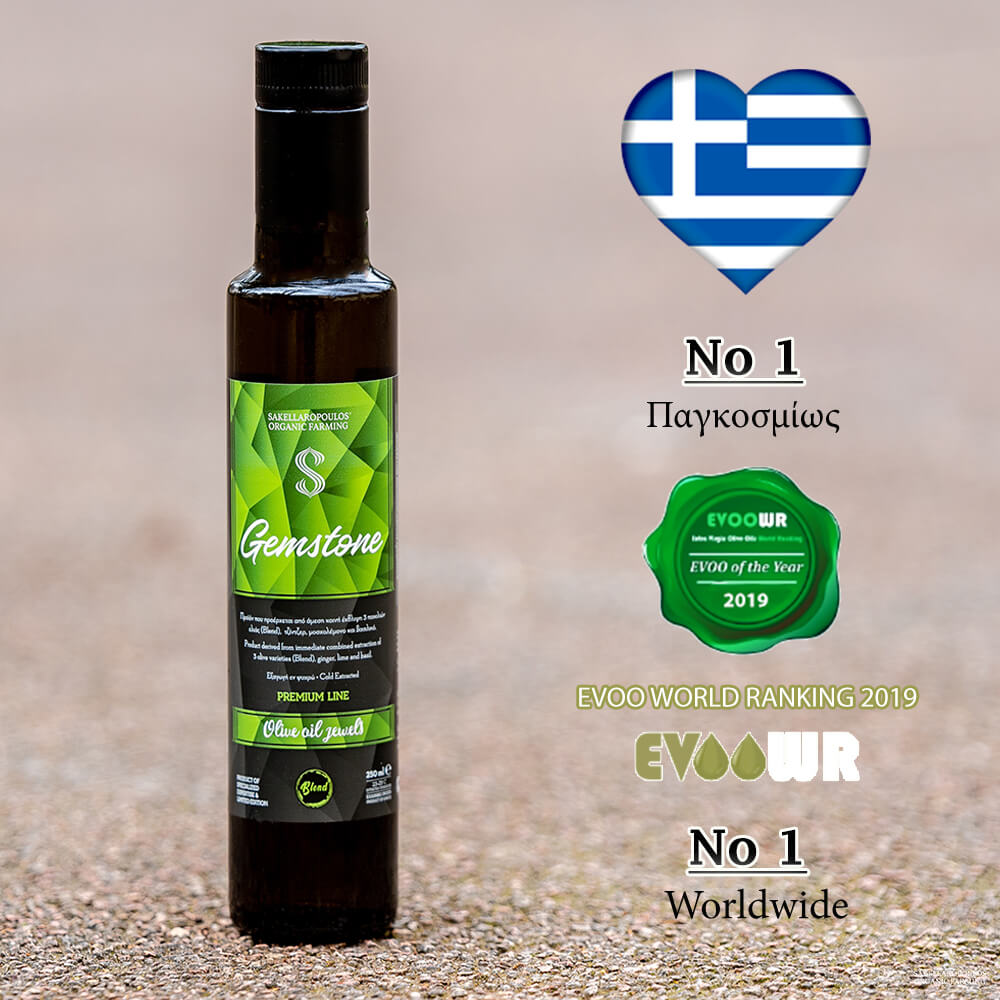 One of the greatest distinctions for Sakellaropoulos Organic Farms, at the most renowned world ranking for olive oils.

The Best Flavored Evoo Worldwide for 2019, according to the EVOOWR International Ranking, with Greece in 1st place in this category !

12.092 olive oil samples from all over the world...
31 International olive oil competitions...
From 34 countries - producers of olive oil...

On 26/10/2019 the World Association of Journalists of Wine and Spirits announced the EVOO World Ranking, which is a point based system that ranks olive oils based on international competition and awards - given for the quality and taste of each olive oil.

31 international competitions from around the world were taken into consideration, with 12.092 olive oil samples for 2019 coming from 34 olive oil producing countries.

It is a great honor for Sakellaropoulos Organic Farms to see Gemstone Blend Flavored Evoo ranking 1st in the world in the category of Condimento-Flavored Olive Oil 2019 on the list of the world-renowned World Ranking of EVOO (EVOOWR) with 307.5 points and also our country in this category ranking 1st in the world. This is the second year that a Greek olive oil, especially from our farms, is awarded 1st place worldwide, as in 2018 Majestic Flavored Blend Evoo reached the same level.

Gemstone Blend evoo has had an exceptional year regarding the competitions of 2019. Its first award came from Tokyo, Japan, in March at Japan Olive Oil Prize 2019 with a Gold Award and Best Flavored olive oil of the competition, its second great award came in April, at the London International Olive Oil competition 2019 with a Gold award and exciting comments, while its third distinction came from Italy, in May, from EVOIOOC 2019 (EVOO International Olive Oil Contest, where it was awarded a Gold Award. Its fourth award came from Israel last June with a Grand Prestige Gold distinction at Olivinus 2019. In all these competition, besides its amazing awards, the expert panel taster's comments were very encouraging.

It is noted that it is the first time for a Greek olive oil and a Greek single estate company, is at the top of this category for 2 consecutive years.

At the same time, Sakellaropoulos organic farms were distinguished among other important categories and places in the EVOOWR 2019.

•Gemstone Blend Evoo and Agourelaio organic Evoo are ranked at the Evoo's of the Year 2019, where only 2% of the total competing awarded olive oil from all over the world managed to get (EVOO OF THE YEAR 2019)

•With a total of 1219 points, Sakellaropoulos Organic Farms are honored to be in the 2nd place of the Best Greek Olive Oil producing companies (RANKING OF COMPANIES OF GREECE 2019).

This international distinction is the 135th international award for Sakellaropoulos Organic Farms, a unique record for a Greek single estate producer, of 135 international taste, quality and health beneficial properties awards for our products.