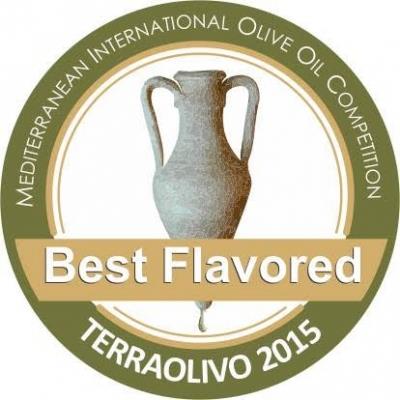 A great, triple, honorary distinction for Sakellaropoulos Organic Estates at the 6th international olive oil competition TERRAOLIVO 2015, which constitutes the 3rd top competition worldwide, based on the international standards (EVOOWR).

( Terraolivo 2015 is consolidated as the 3rd competition in global importance, for Evoo World Ranking, which includes the results of all international competitions in the World.)

It took place in the city of Jerusalem, Israel, from the 8th until the 10th of June,2015, and more than 520 olive oils participated, from 18 countries, such as Spain, Italy, Greece, Tunisia, Turkey, Portugal, Israel, Argentina, U.S.A., Uruguay, Argentina, Peru, Saudi Arabia, etc.

“Oleoastron evoo” from our olive groves, has also been honored with a gold GREAT TASTE AWARD in London 2013 and the Agourelaio organic extra virgin olive oil was honored in 2015 with a gold award  at the 20th BIOL International and was also  selected as one of the 25  best organic olive oils at the BIO-press in Germany.

For us, this triple award is a great and special honorary distinction, since it comes from expert panel tasters in olive oil, in one of the three best olive oil competitions worldwide.

These three awards together constitute the 32nd international award for Sakellaropoulos Organic Farming in the last four years, and the 11th award for 2015 on a global level.