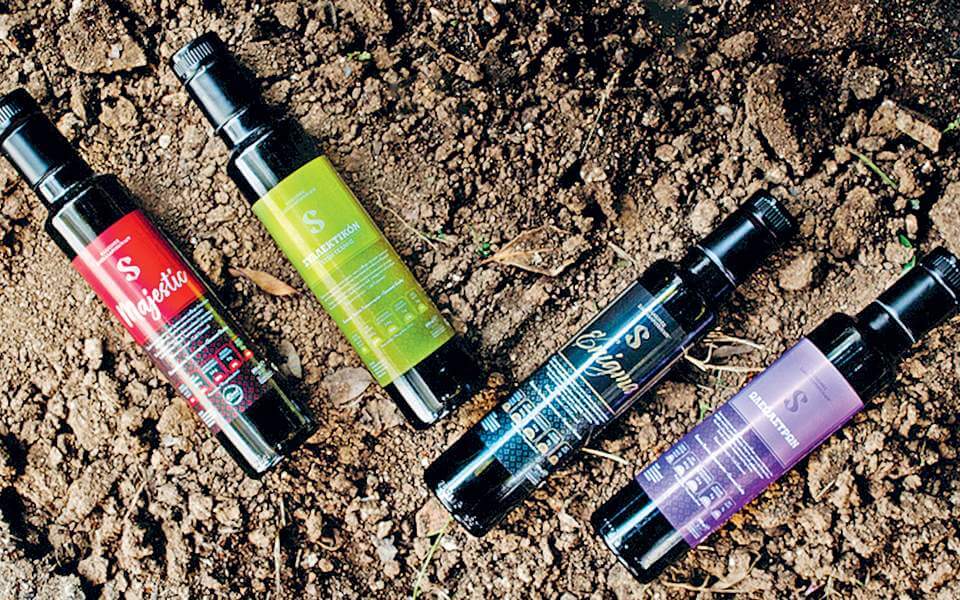 A total of 4,522 award-winning olive oils from 30 different countries competed to secure a good place in the Evoo World Ranking 2018, a coveted distinction from olive growers around the world. The organic extra virgin aromatic olive oil of Sakellaropoulos Organic Farms (Majestic Blend Evoo Flavored With Lemongrass & Tarragon) from Sparta Laconia managed to be at the top of the list of aromatic olive oils (Ranking Of The Best Condimento Flavored Olive Oil 2018). The competition is organized every year by the International Association of Wine and Beverage Writers and Journalists, which collects and compares the award-winning olive oils from 28 professional olive oil competitions. In other words, this is the competition of competitions.

This company (https://www.bioarmonia.gr/el) knows from awards: "It was the 89th award for our company but the most important", the owners say.

Father George Sakellaropoulos and his 26-year-old son Nikos, the new blood of the company, which took the first steps exactly at the time of his birth, are very proud of the exceptional distinction. Not only because the product they produce was awarded in one of the most important global competitions, a fact that of course increases its value in the food markets, but also because in this way Greece is promoted all over the world "as a country that can produce excellent local products ", as Nikos says. It is the first time that Greek olive oil wins the first place in this competition in this category, while the 2nd place was won by an olive oil from Turkey and the 3rd place by an olive oil from USA.

Father and son feel that the path they have chosen and followed with devotion all these years, despite the great difficulties, was the right one. "It is a marathon, not a sprint," George Sakellaropoulos succinctly describes the course.

When he decided to get involved in olive growing 26 years ago, he was determined to grow organically. "Not only because organic products are better for health and the environment, but also because I believed what Hippocrates said: that our diet is our medicine," he explains.

Science today seems to justify it. The family olive oil was selected to participate in an intervention study by the Harvand School of Public Health on the impact of the Mediterranean diet on human health. In this study, 1,000 volunteer firefighters put specific products in their diet in order to investigate the reduction of the risk of heart disease in this population, which is considered a high risk group.

At the same time, in a clinical study carried out by the University of Athens under the responsibility of the associate professor of the Department of Pharmacy Prokopios Magiatis and Mrs. Eleni Meliou, where the olives that have the most health protective ingredients were investigated, the Kalamata olives of Sakellaropoulos were found to contain 5 times more tyrosol and hydroxytyrosol from the others tested. The results were announced at a world conference organized in 2016 in Olympia. "As announced, the consumption of five olives per day can positively affect the lipid profile of the individual," says Mr. Nikos Sakellaropoulos.