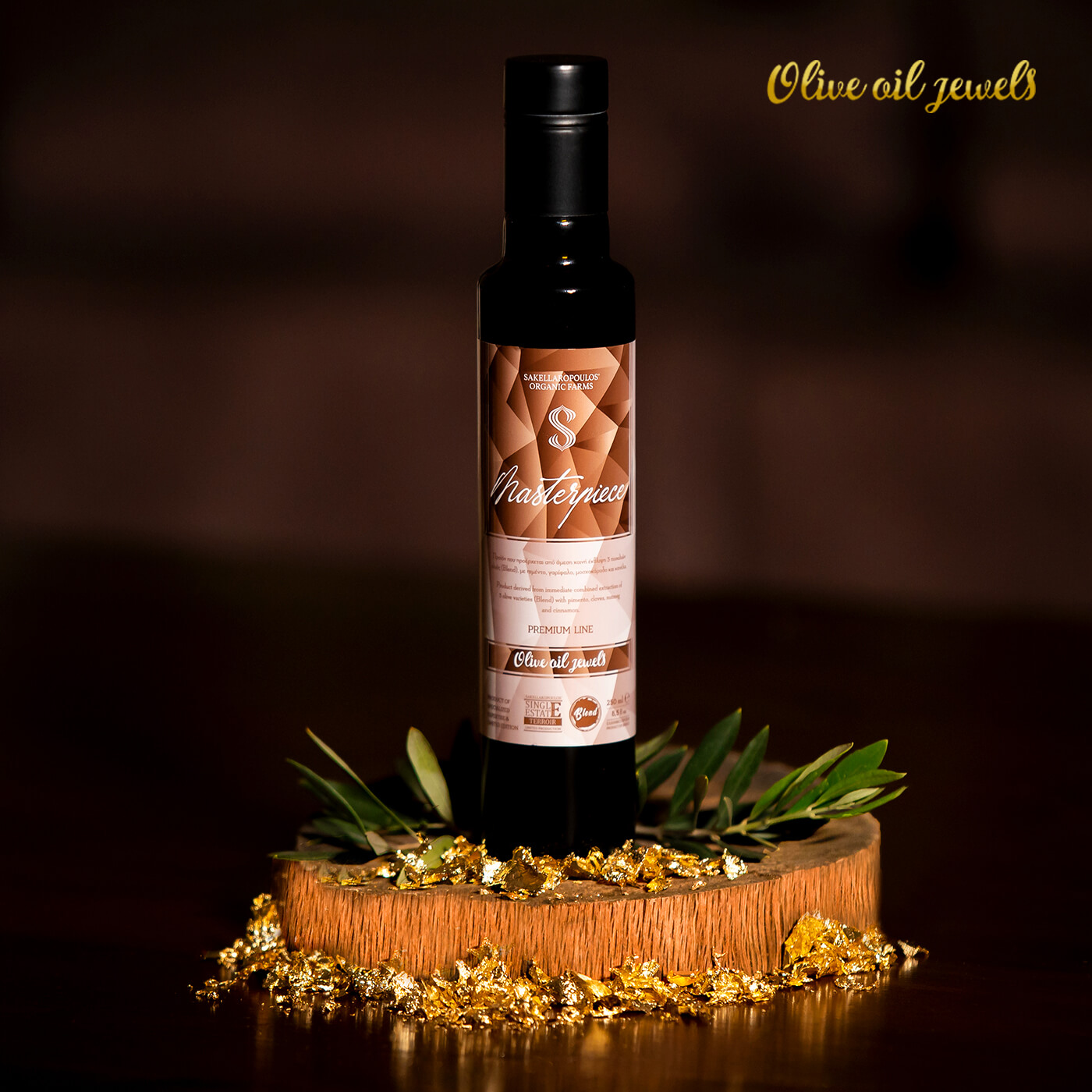 Description: The olive oil "jewel" Masterpiece blend evoo, belongs to the category of multicultural gourmet olive oils, where, with the rare combination of its ingredients and the global uniqueness in its production, it is a taste experience of high gastronomy, a delicious journey into the flavors of the world, with spicy notes.

The definition of spicy olive oil

Sakellaropoulos organic farms were the first in Greece to officially produce premium gourmet 100% naturally flavored olive oils with innovation and specialized expertise, since 1992, combining the rare natural ingredients, from all over the world, in olive oil.

They produce the top multi-varietal olive oils "jewels", of high gastronomy that have the registered name "Olive Oil Jewels" and the quality seal of Sakellaropoulos organic farms. 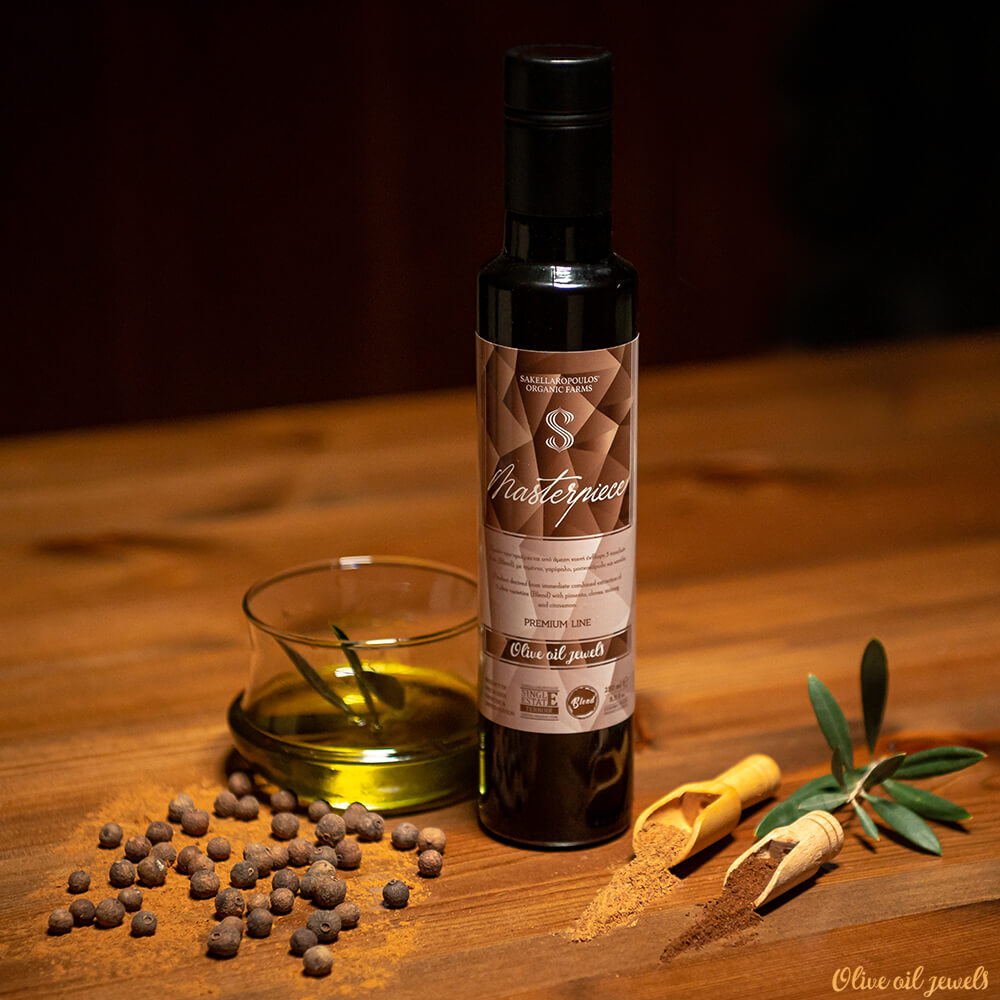 In 2021, with exclusively vertical self-production (single estate), innovative methods, combined with the tradition of the land but also with rare gourmet ingredients of excellent raw material from specific terroir of the world, the olive oil "jewel" Masterpiece blend evoo was created for the first time, belonging to the category of the gourmet Olive Oil Jewels.

Masterpiece, as one of the main exponents of Olive Oil Jewels, with spicy notes, is a delicious spicy gourmet olive oil experience, where with the rare combination of its ingredients and the specialized uniqueness in its production, it invites you on a journey into the flavors of the world of high gastronomy.

It belongs to the category of spicy gourmet 100% natural flavored olive oils and is very different from the olive oils with additives, artificially flavored, known internationally as infused olive oils that are commonly marketed.

The production methodology that we have developed for many years at Sakellaropoulos organic farms is natural, innovative, requires a high level of expertise and combines fresh natural ingredients of globally recognized quality, from three continents.

The result is a gourmet olive oil, an olive oil "jewel", which combines many natural ingredients in olive oil and highlights many culinary creations, based on the quality of the raw material, the balance of taste in its ingredients and their proper management.

Its uniqueness also lies in the fact that it does not consist of a single ingredient, in relation to most aromatic olive oils on the market, but of a mixture of seven (7) ingredients that each offers, balanced and in different stages, the aromas and the flavors in a unique way, opening new tasting horizons in Greek olive oil.

The ingredients of the gourmet flavored olive oil "jewel" Masterpiece blend evoo, from which the very high degree of difficulty in its production lies, are: 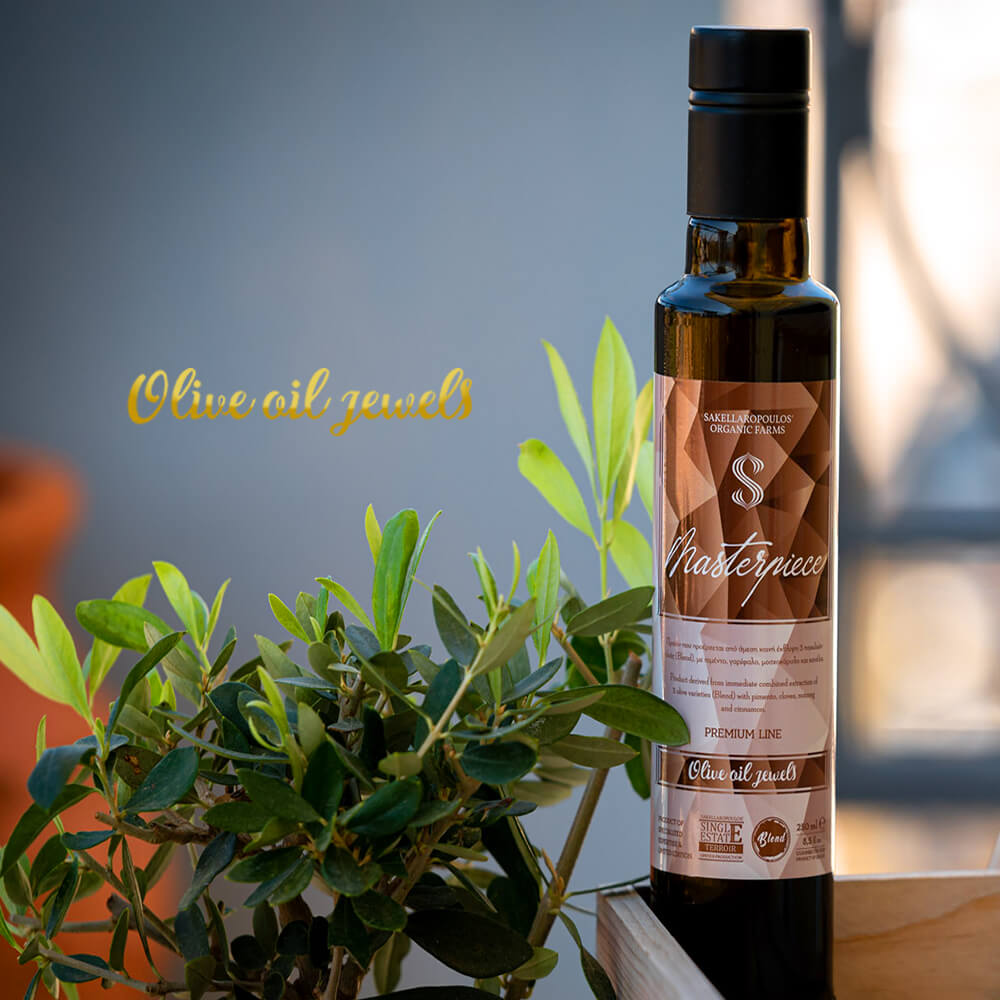 Initially, the combination of three (3) different olive varieties it contains. Olives of Koroneiki, Athinoelia and Koutsouroelia varieties with different degrees of ripeness and biosynthesis, balance the taste of the multi-varietal new olive oil in a harmonious way, giving Masterpiece blend evoo their personality and identity, with the most excellent quality characteristics of each variety.

Following the rarity of Masterpiece blend evoo, is the natural addition of four wonderful and unique natural ingredients from the global palette of aromas and flavors: pimento, clove, nutmeg and cinnamon.

The noble pimento, with its extremely warm aromatic properties, its multifaceted taste, which is at the same time hot, sweet, but also spicy, provides the basic identity to the spicy gourmet olive oil Masterpiece blend evoo.

Pimento is a rare dried tropical fruit, with a granular round shape, of the evergreen tree with the scientific name Pimenta Dioica, native to tropical Latin America and the West Indies (Lesser Antilles, Jamaica, Honduras, Trinidad, Cuba etc). Its fruits are harvested green, before they ripen, and are traditionally dried in the sun, where they finally take on their characteristic brown color.

It is also known in the global trade as pimento or "Jamaican pepper" and it should be noted that we should not confuse it with pimiento which is a type of red sweet pepper. In the past, the export of the plant from Jamaica was banned and any attempts to plant it from seed were unsuccessful. In fact, the prevailing view was that it only grows in Jamaica, where the birds of the area play a major role in fertilization, spreading it in the surrounding area.

Bibliography states that the Aztecs and Mayans were the first to use pimento in a stimulant, sparkling drink, while the Incas used it to flavor many of their preparations.

The Europeans and the people of the Mediterranean discovered pimento after the travels of Christopher Columbus, while the French were the ones who called it the pepper of Jamaica (poivre de Jamaique), although it does not belong to peppers.

In 1621 the English coined the common name Allspice, which describes its aroma, which combines aromatic tones of many well-known spices. Contrary to the name given to it by the English, pimento or Allspice, is not a mixture of many spices together, but is a unique ingredient that adds and characterizes with its rare aroma and taste, the new spicy gourmet olive oil Masterpiece blend evoo. 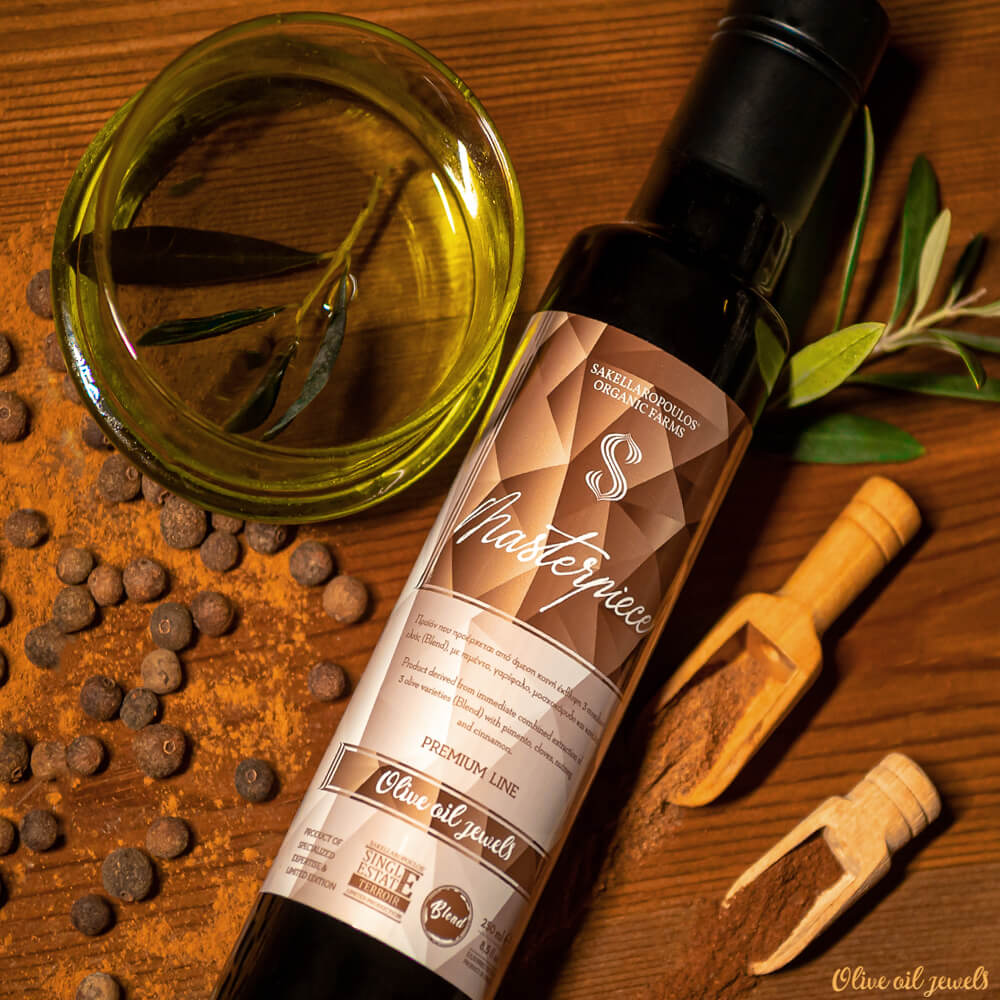 The palette of rare and unique ingredients is completed by the exotic nutmeg of Indonesia, the miraculous clove of the East and the queen of spices, Ceylon cinnamon.

The exotic nutmeg comes from the evergreen tree, native to what is known as the Spice Islands in Indonesia. Nutmeg is a delicate, slightly sweet spice that is widely used in both Asian and Western cuisines, in the preparation of many dishes.

Its distinct aroma is intense and decisive as a basis in the production of the spicy gourmet olive oil Masterpiece blend evoo, emphasizing its character.

The continuation of the rare ingredients rightfully belongs to the wonderful clove, a miraculous spice from the depths of the East that has traveled around the world through gastronomy. Clove is the fragrant flowering bud of the Syzygium aromaticum tree, from the Myrtaceae family and should not be confused with the known flower.

It was a means of trade in the 17th century, like few rare spices of that time. Its aroma and taste bring to mind the East while today clove is used as a key ingredient in high quality cuisines and gastronomic beacons.

It is used in the production of the spicy gourmet olive oil Masterpiece blend evoo in a unique way that embraced the olive oil and its other rare ingredients, to provide intensity and prolonged superior taste and aftertaste, as the final touch to a "jewel".

The queen of spices, the authentic Ceylon cinnamon is the last ingredient but also the one that with its dynamics completes the rare creation of a delicious "jewel", by Sakellaropoulos organic farms.

Cinnamon is found in areas of Southeast Asia, South America and the Caribbean, while Ceylon cinnamon stands out for its high quality.

Cinnamon was often used in Mediterranean countries in antiquity, while many described its aroma as the best and most expensive in the world. In those years it was a great gift for kings, as it was not easy to get it. 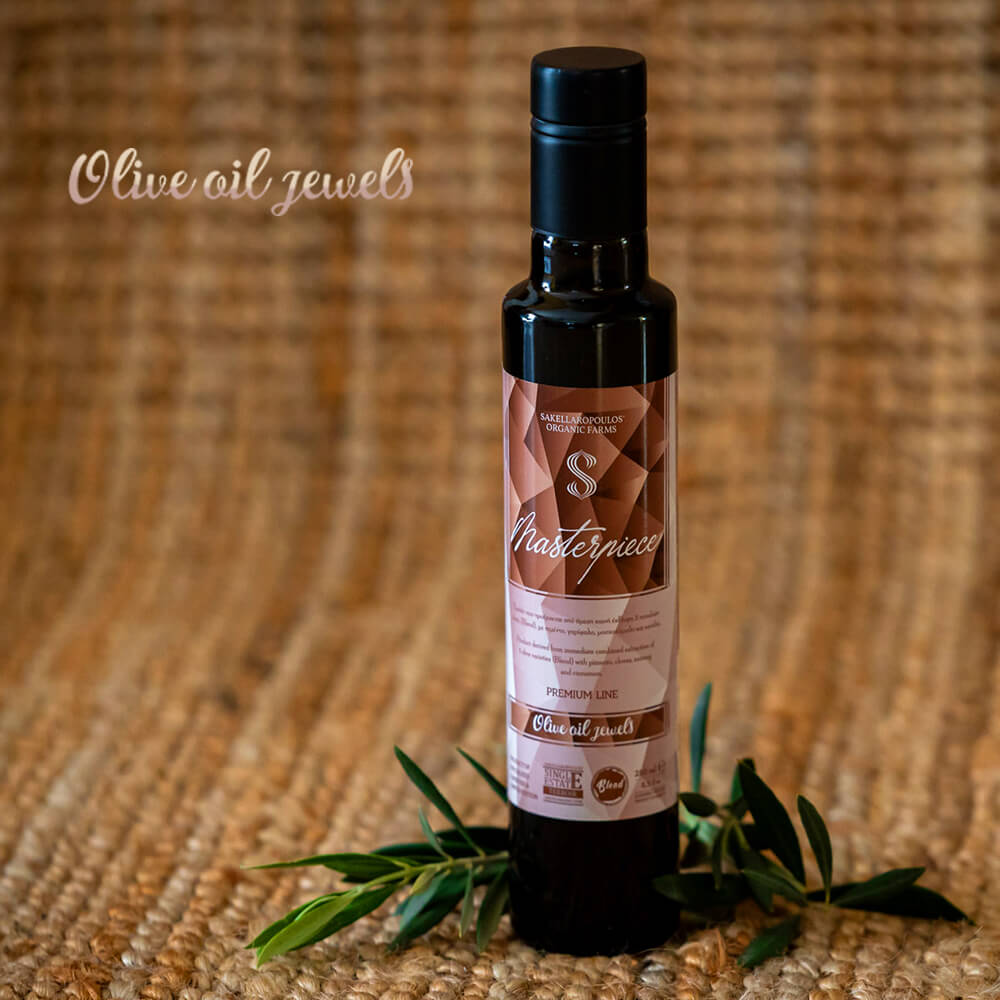 Cinnamon, as an ingredient in the spicy gourmet olive oil Masterpiece blend evoo, gives superior organoleptic characteristics and prolonged balance in the aftertaste, combining the intoxicating aromas from the depths of the East.

It has been recognized worldwide since its first year of release, in 2021, in the largest tasting competitions in the world, with the top being the 2nd place in the world for 2021 in its category in the EVOOWR world ranking, which counted and evaluated the awarded olive oils (16.584 samples of olive oils) from 2105 companies and 37 olive oil producing countries.

Masterpiece is the result of the persistent vision of Sakellaropoulos organic farms, in the emergence and evolution of the taste characteristics of olive oil in new ways of high gastronomy, with the new series "Olive Oil Jewels".

The focus and philosophy of the whole new series of "jewels" of olive oil with the signature of Sakellaropoulos organic farms, is exclusively the great value and the global uniqueness in their internal content, and not the packaging or the design, the marketing or the branding.

As a single estate and terroir olive oil of Sakellaropoulos organic farms, it is packaged exclusively in our modern packaging facilities, with all the legal specifications for food safety and hygiene (see more). 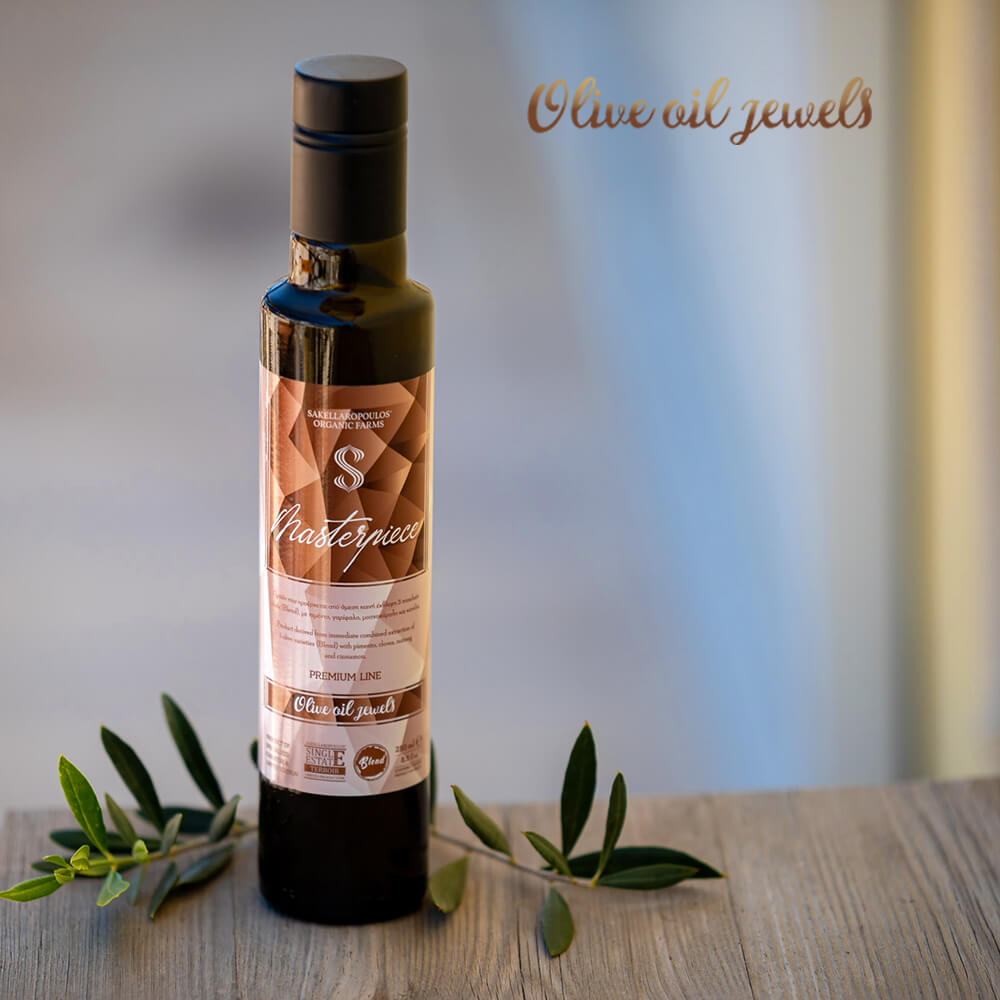 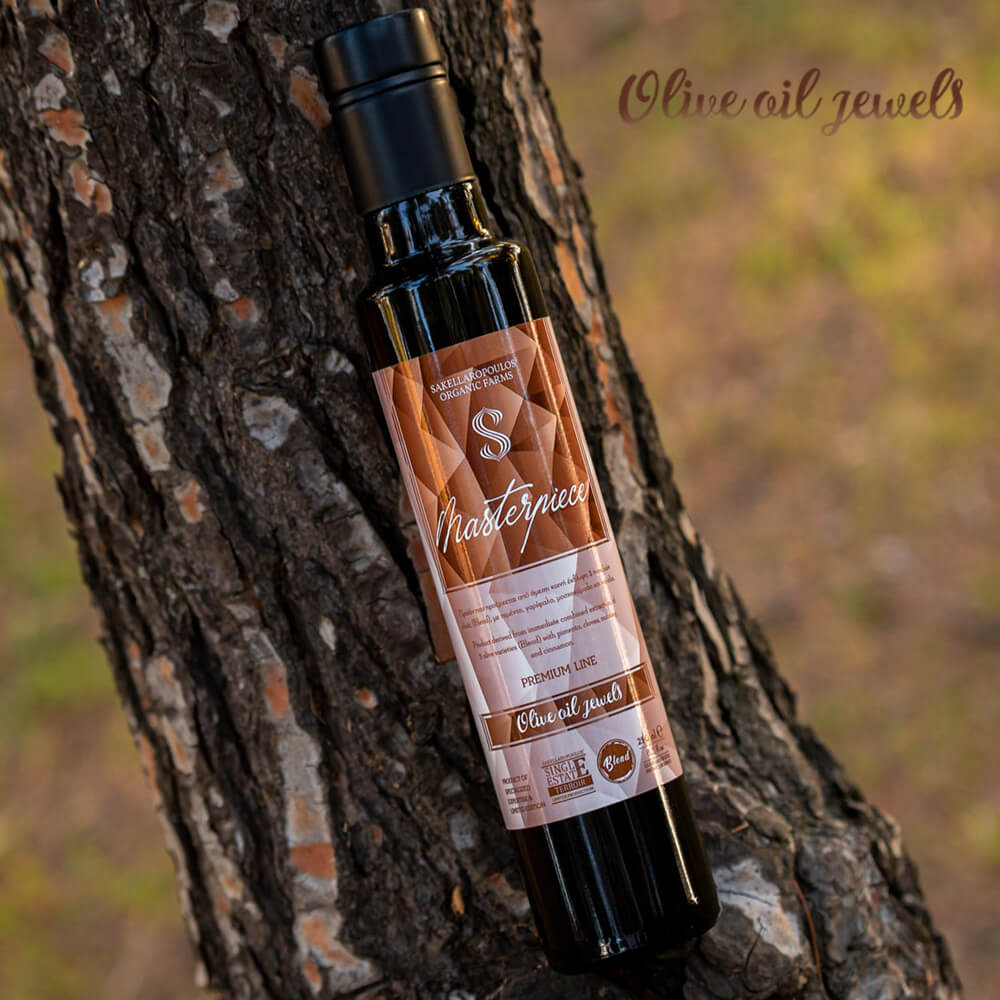 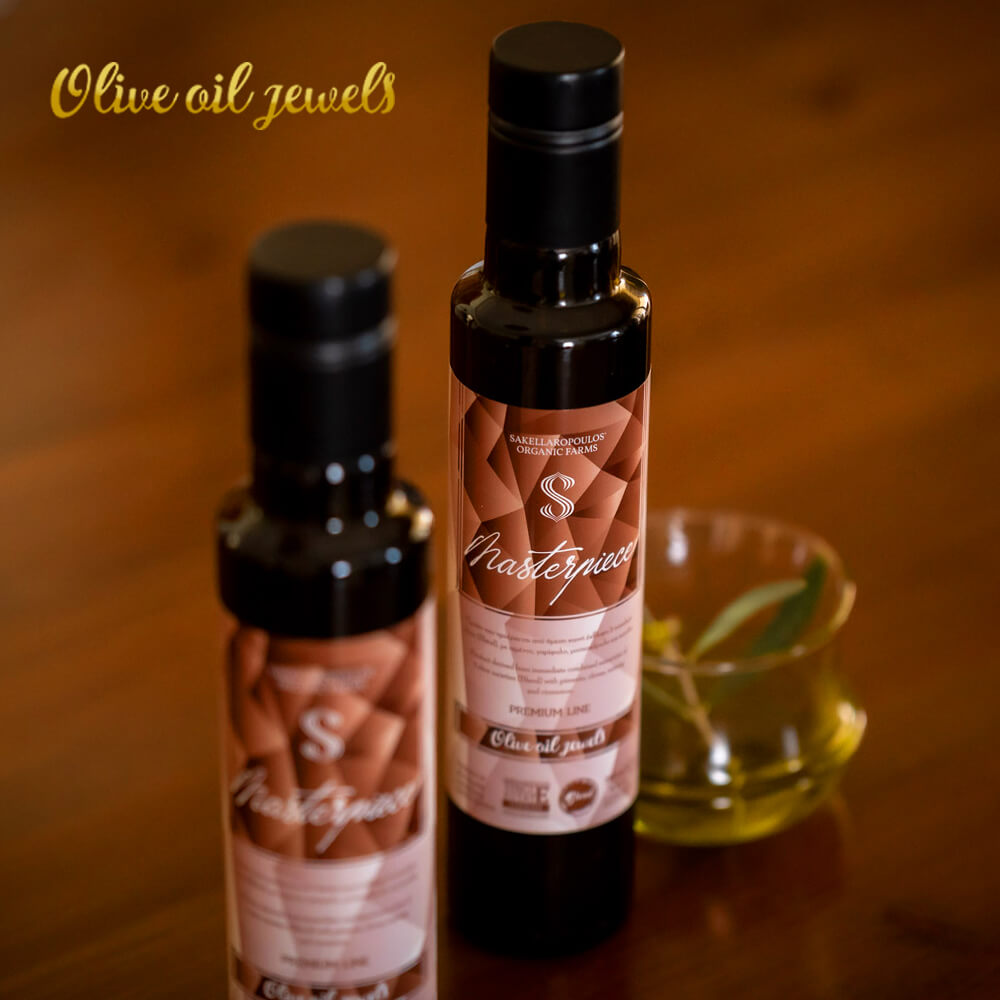 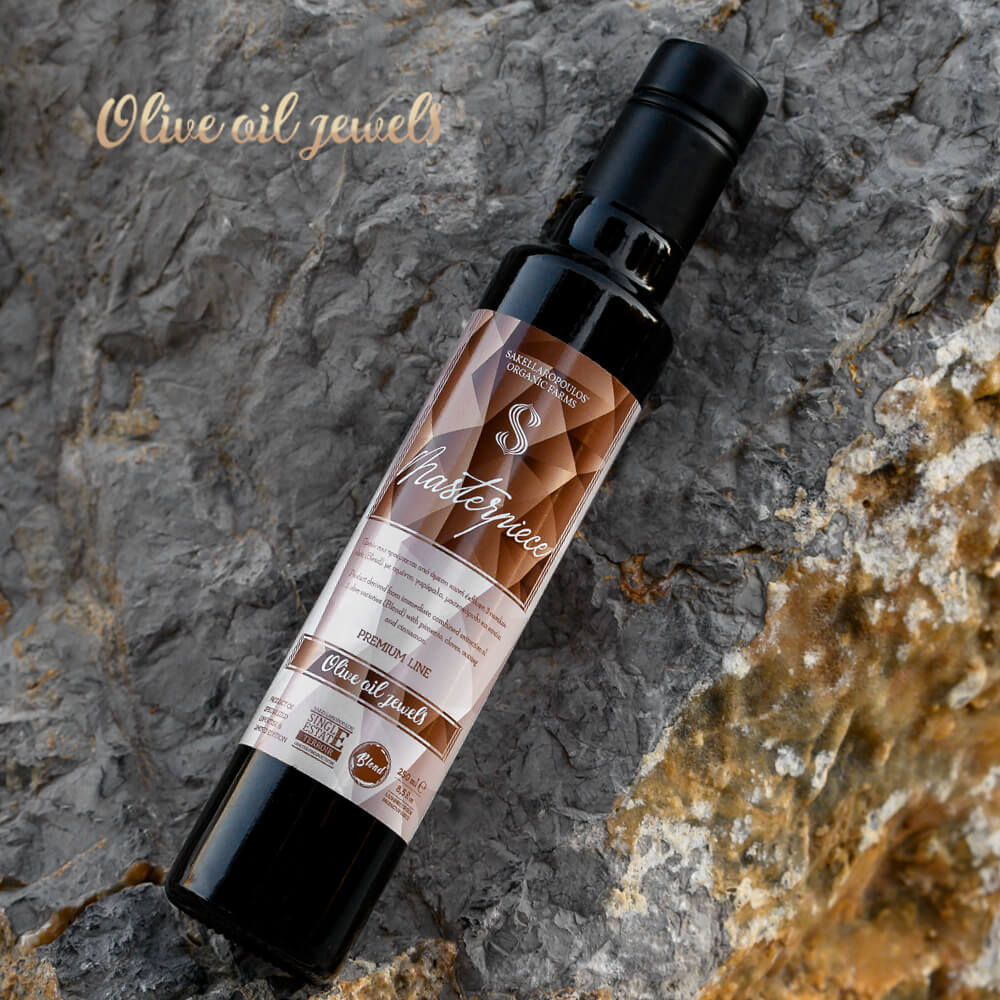